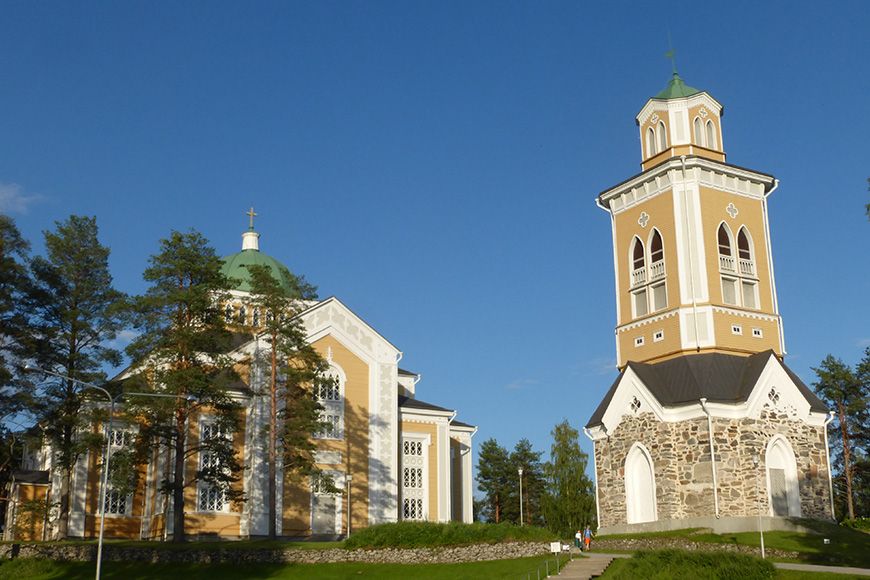 Finland - not just lakes and forest

By David Owen, recently returned from Savonlinna Opera and the Kuhmo Music Festival

Starting at Kuopio airport in the north of Finland, our guests were entertained at a lakeside hotel close to Kuhmo, the heart of Northern Karelia, for two nights and two days of the Kuhmo Chamber Music Festival. Music by the greats including a clarinet solo by Messiaen and the totally barmy ‘Eight Songs for a King’ by Peter Maxwell Davies, where the baritone soloist is required to cover a six octave range. Kudus were not fazed and pronounced themselves well pleased by their introduction to this festival, where young musicians wander round on foot or bicycle and you can find yourself lunching al fresco next to a cello or its player.

Our guests were also introduced to the Kalevala, the epic poem written by Elias Linnrot, based on oral ballads transcribed from the rural sources in the early 19th Century. This work of 50 separate runes provided the bedrock for Finnish nationalism in the 19th Century as the country freed itself from Russian rule. The inspiration for Jean Sibelius, the national composer (and a thoroughly bad lad), and painters seeking the origins of this small nation, the Kalevala relates, through its verses, an ancient mythical civilisation.

Pausing for an early morning visit to the Winter War museum in Kuhmo, which brings to life the heroic 1939-40 struggle of the Finnish people against their Soviet neighbour, we travel on to Savonlinna. On route, our guests enjoy breath-taking views from North Finland’s highest mountain; actually more of a large hill, but with the vistas available who will quibble?

Another lakeside hotel presents us with interesting garden decoration – think Soviet tanks and mortars – as we prepare for two nights at the Savonlinna opera festival, celebrating the fiftieth anniversary of its restarting in 1967. Originally established in 1912, the festival ran for only five years. It now showcases great singers in fine operas performed in a 14th century castle, which rises Excalibur-like from the lake surrounding this idyllic Finnish town. Pop-up restaurants provide fine fare but the operas are the true stars. Even the nudity of Rigoletto doesn’t shock hardy Kudus, though we doubt that Verdi originally included such staging.

Kudus like to throw in a bit of walking and fine architecture and we cover both as we wander through ancient forests; visit the largest wooden church in the world at Kerimaki and stroll along the Punkaharju esker, renowned for some of the country’s finest scenery.

Casting off our opera finery, we travel on to Lappeenranta for a visit to Finland’s oldest Orthodox church, based in a fortress complete with its own museum and art gallery. Lunch by the lakeside is a fascinating spelt risotto with celeriac, braised in thyme butter, fava bean puree, goat cheese and rocket, before we travel on to Haikko, our delightful 10 acre country house hotel situated directly on the Gulf of Finland. We find time for a brief stop in Hamina with its octagonal town layout and one of the great cake shops of the world.

The next morning Kudus wander round Porvoo (Borga in Swedish, all signs being in both languages), where 17th Century warehouses line the river and the cathedral looms large over this town where, in 1809, Alexander I signed the Treaty of Porvoo, creating Finland a Grand Duchy.

Next is Ainola, Jean Sibelius’s timber-built home for fifty-one years, to where he would return after his escapades in Helsinki and various other European capitals. Sibelius produced very little published music in the last 30 years of his life and burnt his much awaited Eighth Symphony in the fireplace of Ainola. Listening to the previous seven and his tone poems, we  appreciate that the national composer may have felt that there was little room for improvement.

Helsinki is our last night destination and we enjoy a guided tour of this jewel-like capital before dining in Olo, one of the city’s finest restaurants, and collapsing into the luxury of our five star hotel. On our final morning, a walk through the parks surrounding Helsinki’s lakes gives a wonderful impression of the range of architecture, old and modern, presented in this cutting edge capital, before we wend our way to the airport and flights home.

A great trip and one to savour for next year.