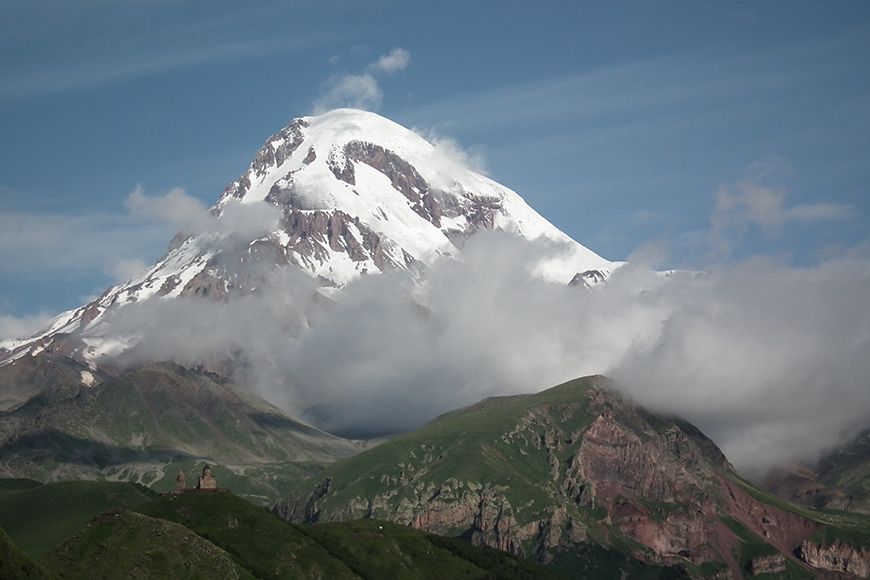 Georgia, the country in the Caucasus

Georgia is very much on my mind, but this is Georgia the country, not the song. The country is flanked by the Black Sea to the west and the High Caucasus to the north and east.  In between, lies some of the loveliest countryside you could possibly wish to find, enhanced on a sunny June day by spectacular wild flowers, birds and butterflies.

As you travel around Georgia, you are struck by the contrasts. The lush wine-growing Kakheti region with its fortified Orthodox churches and monasteries. The beautiful walled town of Sighnaghi, perched on a hill with views stretching to snow-capped mountains. The haunting, rolling, flower-filled steppe that surrounds the Davit Gareja monastery complex, and sweeps on towards the border with Azerbaijan.

Egyptian vultures patrol the cliffs, Rose Finches and Eastern Wheatear alight on bushes, the air hums with insect life and a tortoise slowly crosses our path as we climb the hill to admire the frescoed caves, once inhabited by thousands of monks, massacred by invading Persians.

Tbilisi, the capital, has a festive air in summer, full of cafés and colourful oriental carpet shops.  In recent years the old town has undergone extensive restoration and now you get a good impression of how this Silk Road city used to be.  You can imagine the merchants from the East, congregating at the thermal baths and caravanserai, the surrounding narrow streets full of wooden houses and jutting balconies entwined in vines. The narrow lanes would have been alive with the chatter of many nationalities, for this was a trading city for Armenians, Jews, Persians, Russians and Ossetians. This is a country that today boasts 15 main ethnic groups.

Further north in the mountainous land of the Svans, the people claim to be true -blooded Georgians due to their isolation for centuries amongst some of the highest peaks in the Caucasus.

Cattle rearing is the main occupation in the mountain villages of Svaneti, many of which have impressive defensive towers. A bone rattling drive up tracks took us to Ushguli 2,200 metres in altitude and a UNESCO World Heritage Site, famed for its stone towers clustering together in groups at the end of an alpine valley.  A breathtakingly beautiful walk took us along a glacial valley full of Daphne glomerata, Rhododendrum caucasicum, Primula auriculata Lam., Gentiana angulosa and hundreds of other thrilling plants. Mount Shkhara, 5068 metres the highest mountain in Georgia, makes a dramatic backdrop to the valley.

On returning from our walk we were welcomed to a supra, a Georgian feast. The table was laid with freshly baked cheese pies, tomato salad with dill, grilled aubergine rolls, veal stew with tarragon, home-made cheese, potatoes with onions and herbs. Jugs of cha cha the local firewater, warmed us up. Just the thing to try after a mountain walk and our charming hosts, local farmers, chivvied us to eat and drink just a little more.

Moving to the Kazbegi region, dominated by snowy Mount Kazbeg 5047 m, a mountain full of mystery and legend, the area is noticeably devoid of trees. Sheep rearing is important here and huge flocks make fascinating patterns as they graze on the steep hillsides.  We drove up to visit the 14th century church of the Holy Trinity, an important place of pilgrimage housing a miraculous icon. The church is perched on a ridge above the village and we walked down to the valley in sunshine to another delicious Georgian lunch.