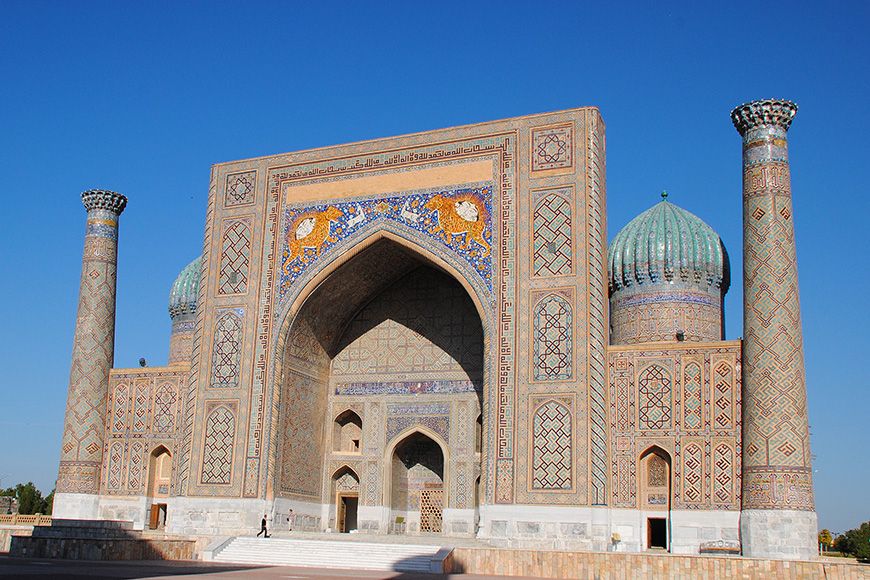 
For any traveller, Bukhara, Samarkand and Khiva evoke the romance of the Silk Road and the long and complex history of Central Asia. Genghis Khan, Tamerlane, Zoroastrianism, Scythian and Mongol horsemen, Russian Imperialism and the Great Game are just some of the threads that weave an extraordinarily rich and fascinating history.

Our tour not only covers the main Silk Route cities of Uzbekistan, but also includes walking in the Chatkal Mountains northeast of Tashkent and the Zarafshan Mountains south of Samarkand; an excursion into the Kyzylkum desert to see an impressive fort dating back to the 4th century BC; and a visit to the fertile Fergana Valley, filled with pomegranate and apricot orchards and famed for its ceramics and silks.

HIGHLIGHTS of our Uzbekistan walking tour include:

'It was stunning. Having read, commissioned, edited and published books on the Silk Road, Islamic art and architecture and the Great Game for years it was just wonderful to be there. To see the Registan in Samarkand as the sun was beginning to go down with the swifts swirling before heading upwards for the night is something I shall never forget.'

'An excellent trip with plenty of activity. The people of Uzbekistan couldn't have been more helpful and hospitable. I liked the variety of activity too.' 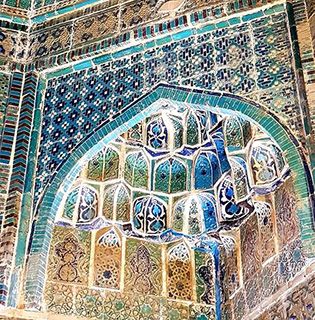 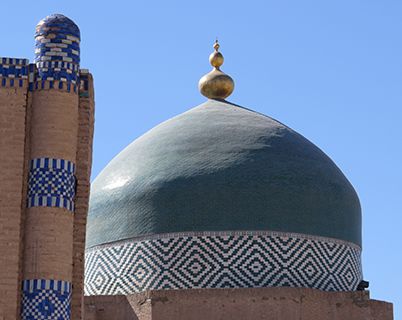 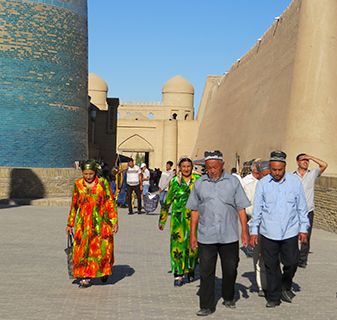 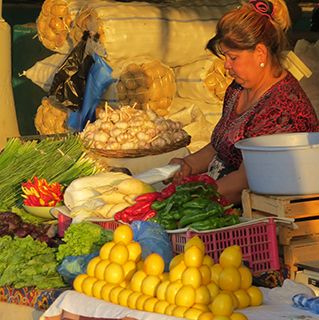 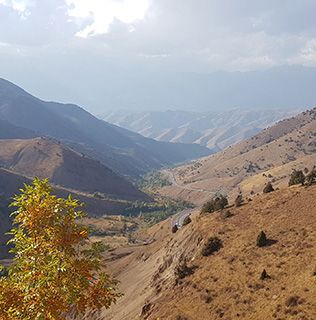 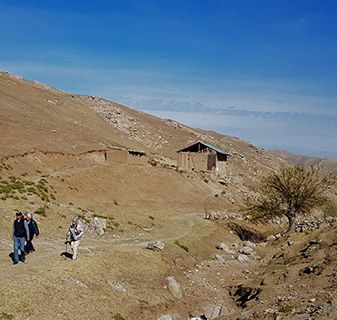 After arriving early in the morning at Tashkent airport, a brief transfer takes us to our comfortable 4-star hotel in the centre of this vibrant capital. Once we have rested and had a late brunch, we drive across the city to the Museum of Applied Arts. Housed in the former home of an Imperial Russian diplomat, the museum contains fine textiles, carpets, ceramics and jewellery. We proceed to the monuments of Hazrat Imam Square, including the 16th century Kukeldash Madrassa and the Muyi Muborak library, containing the world’s oldest Qu’ran. Dinner this evening introduces typical Uzbek dishes – spiced rice with mutton, grilled shashlik and piles of autumn grapes, peaches and figs.

A morning’s drive (4 hours) takes us over the Kamchik Pass, the ancient Silk Route, now a tarred and busy road from China. We descend into the wide Fergana valley, bounded to the north by the Tien Shan mountains and to the south by the Pamirs. Fruit harvesting is in full swing and mounds of melons, grapes and watermelons fill roadside stalls. Our small modern hotel (3 star) is well situated in the centre of pedestrianised Kokand. We walk to the royal residence of Khudyar Khan and the Djami Mosque.

We drop in on the studio of renowned ceramic master Rustam Ustanov, who continues an 800-year-old tradition in the village of Rishton. We investigate silk making in Margilan: the silk products of Fergana are famed. A walk and tea in a grape producing village brings us into contact with local people and their traditional houses centred round an interior courtyard.

We return to Tashkent via the Kamchik pass and stop at the Museum of Fine Art with its fine textiles, furniture, ceramics and paintings. We have time to walk in the park or swim in the hotel pool, before dining in a local Uzbek restaurant accompanied by traditional music.

We spend the day exploring and walking through the Chatkal mountains in the Ugam – Chatkal National Park, 1½ hours drive from Taskent, where autumn has already coloured the walnut and wild plum trees and birds of prey soar on the thermals. We enjoy lunch in a traditional Uzbek riverside restaurant before returning to Tashkent.

An early flight to Urgench in Khorezm province, west of the Kyzylkum ‘Red Desert’, enables us to see the ancient UNESCO desert fort Ayaz–Kala. Its origins date back to the 4th century BC, when it was supported by fertile lands around the Amu Darya, the fabled Oxus river. After a picnic we drive (2 hrs) to Khiva, once one of the most important cities on the Silk Road, where we stay in a charming hotel, perfectly placed to explore the incredibly atmospheric Ichon Qala.

Khiva, a successfully restored walled city, once notorious for its slave market, gives a real feel of the past. We explore the Ichon Qala, a labyrinth of madrassas, mosques and blue tiled minarets. Wandering in the lanes below the minarets and domes, one can readily imagine caravans entering by one of the four gateways, laden with silk and spices. Dinner may include grilled aubergine salad and manti, the little steamed dumplings filled with cheese and vegetables that are found all over Asia.

Khiva is a photographer’s dream: catch the early morning light playing on the blue tiled domes and massive 18th century mud walls. There is time to buy fur hats and bargain for carpets in one of the many bazaars. Just outside the city walls, stands the late 19th century house of a former Russian governor and after visiting it, we set off by road (7 hours) bound for Bukhara. We have a fried fish lunch en route, observe huge fields full of cotton being picked by hand, and enter mediaeval Bukhara by sunset.

DAY 9
B, L, D included
After breakfast in our boutique hotel, we commence our explorations of this extraordinary place, well established by the 6th century BC. Waves of invaders have passed this way – the Achaemenids, Alexander the Great, the Seleucids, the Graeco-Bactrians and the Kushans. The Golden Age of Bukhara flourished under the Samanid dynasty in the 9th and 10th centuries AD when science, poetry and the arts were encouraged. Mercifully, under the Soviets the old city was spared ‘modernisation’. We see the Chashma Ayub Mausoleum, where the Prophet Job struck earth and a spring burst forth, then continue to the simple but intriguing Ismail Samani Mausoleum with its complex brick patterns. We admire the mud and brick walls of the Ark Fortress and, after lunch, visit the Lyabi Hauz complex and the reservoir with its mulberry trees. We move on to the Jewish quarter with its 500-year-old Torah, before immersing ourselves in the famous bazaar with its exquisite domed brick roof.

In the heart of old Bukhara, the Kalyon Minar (minaret) rises some 45 m above the city juxtaposed with the huge Kalyon Mosque built in 1514 with its beautiful columned courtyard and the turquoise tiled Kok Gumbaz. Nearby is the Mir-i-Arab Madrassa, an important Islamic educational establishment and the unusual Chor Minor, with its 4 minarets. In the afternoon, we travel out of the city to see the holiest Sufi shrine in Asia, the Mausoleum of Bakhauddin Naqshbandi, and also the summer palace of the Emirs of Bukhara. There is time for handicraft shopping or relaxation in a hammam before dinner.

DAY 11
B, L, D included
A morning’s train journey (3 hours) takes us to Samarkand, a city famous for its masterpieces of Timurid architecture. It is one of the world’s oldest cities, already established by the 6th century BC. Tamerlane (Timur) made it his capital in 1370 and mosques, madrassas, caravanserais, palaces and bazaars were built as the city flourished. Our exploration of this fascinating city begins with the remains of the famous astronomical observatory built by Ulan Beg, grandson of Timur. We walk around the ruins of Afrosiab fort before we proceed to the museum containing remarkable 7th century murals.

DAY 12
B, L, D included
An early tour of the superb monuments of the Registan, with some of the most mesmerizing architecture of the Silk Road, gives us beautiful morning light for photography and there is another opportunity to return here at sunset. We have a memorable walk through the blue and turquoise tiled alley of 14th century tombs, known as Shah-i-Zinda. The name translates as ‘Living King’ and refers to a cousin of the prophet Mohammed who came to Uzbekistan to preach Islam.

We tour a traditional handmade paper factory before we enter Bibi Khanym mosque and mausoleum. Bibi Khanjm was Timur’s wife and is said to have ordered the construction of the mosque as a gift for her husband. A 3-hour train journey returns us to Tashkent and to our original 4-star hotel before a memorable farewell dinner in one of the city’s best restaurants.

A morning transfer to the airport concludes our holiday. 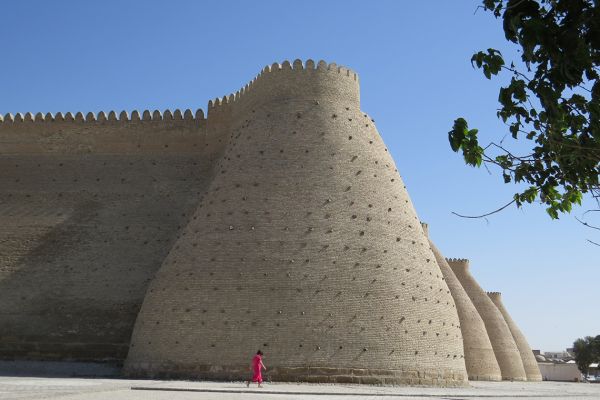 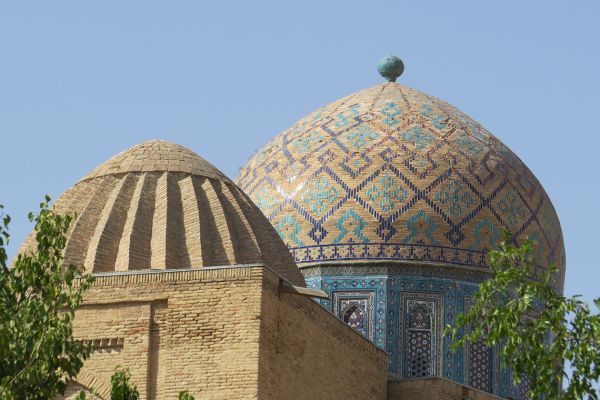 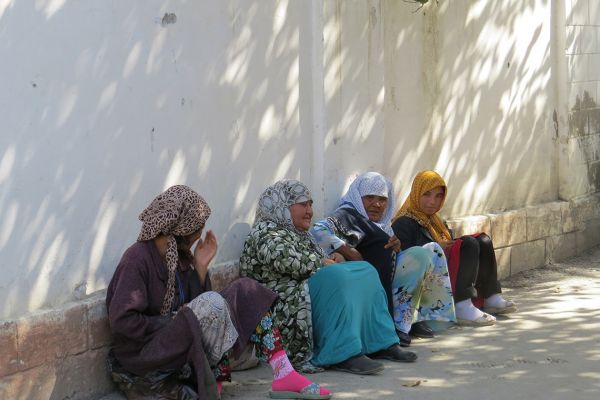 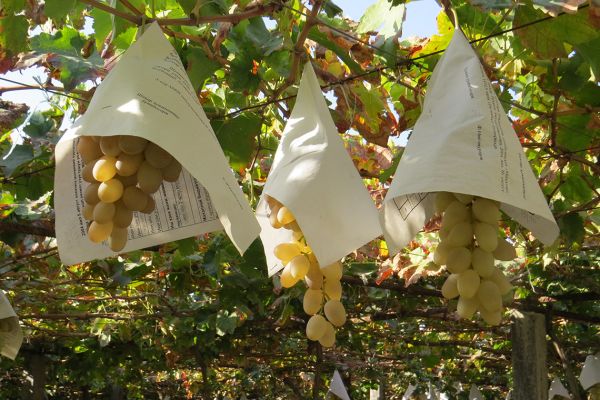 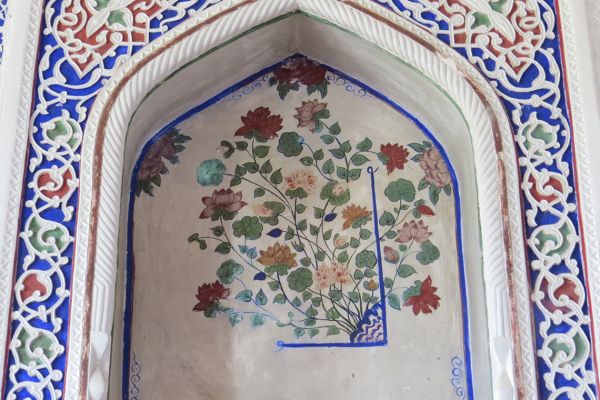 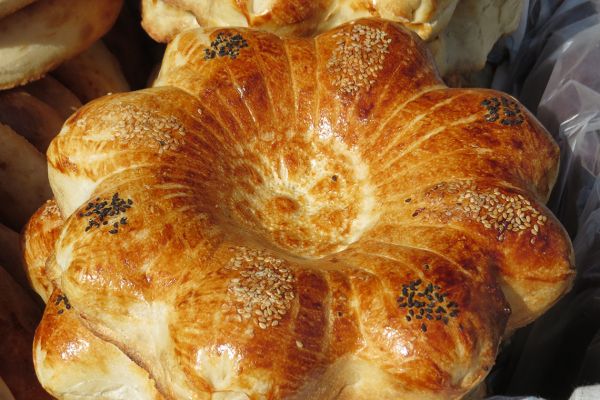 Visitors from the UK, EU, Canada, Australia and New Zealand no longer require a visa for entry to Uzbekistan (for visits up to 30 days). The USA passport holders need to apply for e-visa on www.e-visa.gov.uz.

Normally, there are no specific and compulsory health requirements for entry to Uzbekistan but you may wish to consult your doctor (at least 6 weeks before you travel) about updating your immunisation against Hepatitis A, polio, tetanus and typhoid, or anything else they consider advisable. A dental check-up is also a good idea. You may also wish to check the advice given to travellers by the Department of Health and the FCO.

This is primarily a cultural journey rather than a walking tour. There are some long drives and early starts may be necessary. Walking in cities, on sites or in the countryside most days, often on rough, stony and uneven ground – in the mountains, there are longer walks.

In early October, temperatures are likely to range from 12 to 28°C during the day, but note that the temperatures will drop in the mountains at night. Humidity is very low. 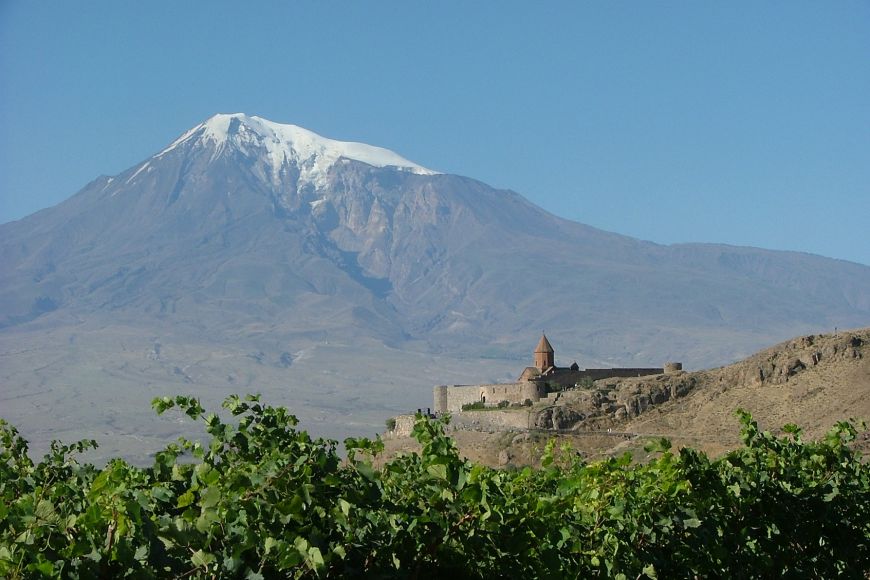 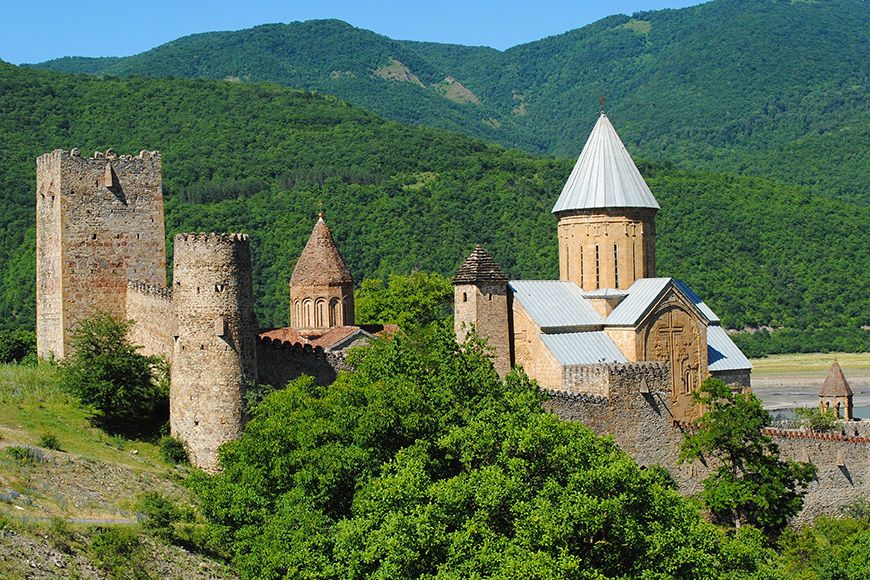