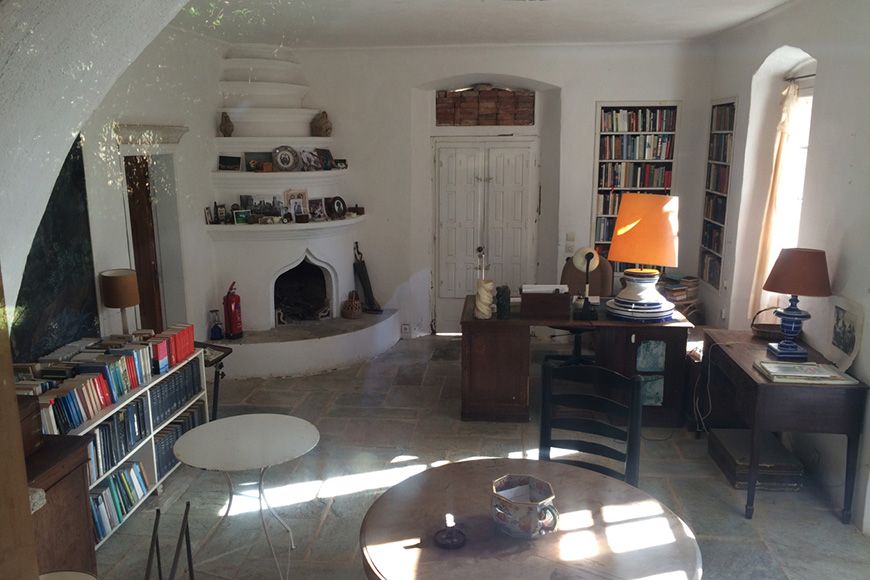 The original blog is on https://plffootstepsgreece16.wordpress.com/blog/

Athens
Five and a half hours later we landed in Athens, to flooding rains! Which Greek gods were welcoming us? Or lamenting our arrival? I was quite concerned that our suitcases would be lost somewhere between Melbourne and Athens but they were some of the first to be unloaded. Yay! Mum and I then found a cafe and using my rudimentary Greek, bought two large coffees and a piece of the yummiest baklava ever! Welcome to Greece!

The hotel is very charming, with rooms that look out on the Acropolis with the Parthenon on top! Quite perfect! After a spa on the roof top - gazing at the Parthenon, I dressed for dinner and joined the others at the roof top bar for drinks. A strong G&T later, I was happily chatting with the other tour members. Mostly from England, with a Scottish couple, and 3 Canadians for good measure. We are 12 in total plus our guide and her husband. Then we traipsed off along busy, evening boulevards, into narrow lanes, up hills and around corners to the restaurant for dinner. The main meal was barbecued fish served with lemon and olive oil dressing- delicious! The meal finished with a small spiral of baklava. Perfect start to our Greek holiday!

Kastraki
We then left the hotel about 930 and started our walk - with a reading from Roumeli at the town square where Paddy had started his walk, too. We then followed a small road, which became a pebbly path to the start of the climb to the monasteries. A stray dog joined us as we climbed steadily along a rocky path. We had glimpsed the monasteries by now, perched atop these enormous rock pillars or wedged into caves in the rock face. A charming climb brought us after 40 minutes to a small pair of wrought iron gates and the sound of banging and hammering. We looked up and saw a load of stone being winched up the rock face to the monastery of St Barlaam above (like the way the monks used to get to the top!).

Missolonghi
The restaurant had a covered outdoor area which extended from the restaurant to the water, the water having multiple, rickety pontoons flimsily straddling the shallows. We were glad to get out of the vans and go for a wander before sitting down to a delicious lunch of pickled octopus, salads and barbecued sardines. And more white wine! After lunch we walked back along the causeway to the town. This was where Lord Byron was rowed to go duck shooting- and fatefully returned one night with the fever which would kill him. It was to see his statue in the Park of Heroes that we drove next.

Kardamyli
The plan was to meet the others at a restaurant on the edge of Kardamyli. As I didn’t want to be early I decided to get a coffee, and instead of avoiding the cafe with all the men sitting outside, I chose it and went inside (inspired by PLF perhaps?). There were a few young people sitting at the bar, and another person on their own at a table… ”Tha-i thela enan kafes parakolo” and a cappuccino appeared at my table! I drank it slowly, watching the women at the bar play with a kitten that had wandered into the cafe. Not so intimidating after all!

Patrick and Joan’s house
With great excitement we then drove to PLF’s house! It is located on the coast, out of Kardamyli, down an inlet, perched over the sea. There are 2 buildings- a modernist styled square building with a flat roof, which is the study with bedroom and bathroom, and a gorgeous, half indoor, half outdoor multilevel house with multiple bedrooms, bathrooms, kitchen, and large living/ dining room. Everything was built out of a warm, honey coloured stone. The buildings are set in a garden with trees and grass and multiple stone seating areas. Someone observed that you could choose where to sit according to the season and the weather! The garden also had stone steps set into the cliff face which led down to the sea in 2 different places.

Being inside Paddy’s study was exciting! It was painted white, with large windows letting in natural light, a round fireplace unlike any fireplace I have ever seen, and lots of books! We were allowed to handle everything, opening books, sitting on seats, touching his desk! I found a book written by Debora Devonshire with a hand written message from Debora to Paddy on the title page! Behind the study were stone steps built into the side of the building which led up to the flat roof- perfect for entertaining!

The main building was entered via a dark, enclosed door, which opened into an arched walkway with a view of the sea. The ground level included the kitchen, and 2 bedrooms with bathrooms on the left, internal stairs led down to a study which then passed outside to a garden area. Up a graceful staircase to the walkway near the main entrance, turn left, to find more bedrooms and bathrooms on the right. Straight ahead led to the large, light living and dining room. The ends of the room had built in sofas, with one end sunken and surrounded by windows which looked out towards the sea, the other end was surrounded by built in bookshelves. Opposite the door into the room, was the door leading outside. It opened onto a large paved area, patches of which were paved in pebbles according to Paddy’s design.

Mani
Today we headed off at 9am for the “Deep Mani”. We followed a beautiful coastal drive that rivals our Victorian Great Ocean Road, in my opinion. The day was again grey and wet but the sea was a deep greeny-blue and looked striking against the white rock which cuts its way along parts of the coast. Limeni, the coastal village in the photo above, is where our stony hotel is located, built onto the hillside. The ground here is so rocky it is almost impossible to dig, the buildings are somehow fastened onto the rocky slopes and built from the ground up!

We dropped our bags and continued the drive to Areopolis - the City of Mars - and the main town of the Mani. Formerly known as ‘Tsimivo‘ (Devil’s land) by the Vlachs it was renamed after the War of Independence which started from here. We wandered through the old town and visited the cathedral PLF had written about with the zodiac frieze on the outside of the cupola. Then we descended along cobblestoned streets and narrow lanes to some Tower houses. These were built as defensive structures by warring families. A rather large one with multiple attached buildings was actually Giorgos’ school at one stage. It now lies in ruin, partially collapsed, partially covered in scaffolding that has been there, untouched, for decades. The plans for repairing the property lost in family conflict.

After lunch we continued walking away from town, along the sea, past cows and dung and dung beetles to a stony beach, over a headland, through a car park to Diros Caves. We had just made it in time for the last tour of the day. We climbed down steps into a dark cavern, and then into flat-bottomed boats which were floating on the shallow water. Silently, we were pushed off and steered carefully through the caves. It was very eerie and reminiscent of the stories about being taken across the River Styx in the underworld. After a surreal time floating through the caves, we disembarked at a different spot and then walked for several hundred metres along walkways, past stalactites and stalagmites to the exit, which itself was about 500m from the entrance to the caves.