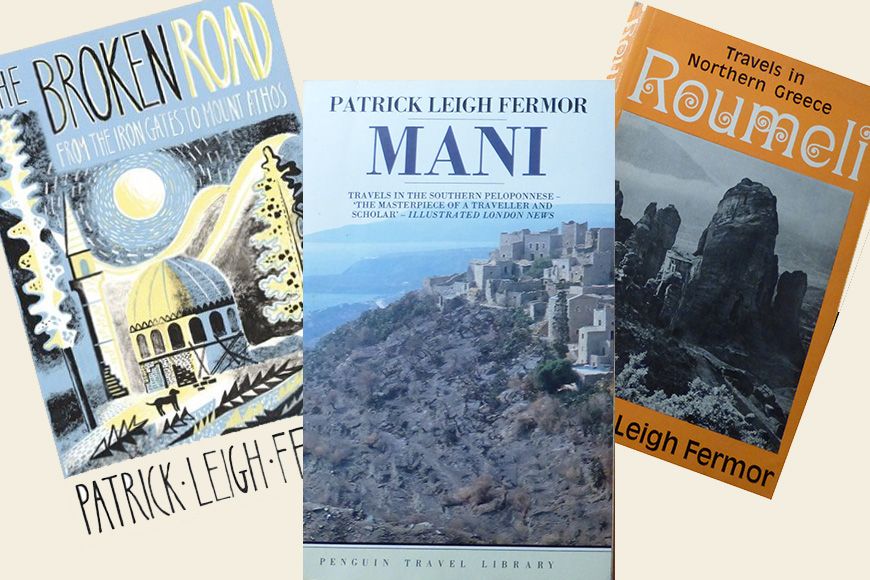 In true Patrick Leigh Fermor style, my research for the new Greek trip last year was full of memorable encounters.

In spring I was amazed to hear Jon Humphreys discussing Leigh Fermor (Paddy) in his BBC documentary just a few hundred yards up the road from my house in Areopolis (not really an encounter but still uncanny).

Then in June, while wild camping on remote Mount Tagyettus, I met a British ‘diplomat’ (actually the Ambassador incognito) paying homage to Paddy by trekking over the mountain and down to Kardamili.

In early November I joined Fi and a couple of her friends for a dry run of the trip through magnificent landscape and vibrant autumn colours. Meteora was blissfully tourist free, and while one no longer expects to encounter monks leading their provision-laden mules up the hill, we were able to enjoy the monastic solitude, (though definitely NOT the decline!) that Paddy experienced. Then to Missolonghi – one of the quirkiest sections of ‘Roumeli’. Paddy went there on a quest for Byron’s slipper, and I thought I would ask some locals if they knew the present whereabouts of the precious footwear. To my surprise, they took my question seriously, but regretted that they had never heard of either the slipper, nor of PLF, at which point, Fi and her friends decided to pay their own tribute to Byron by seriously patronising one of the local shoe shops. Better luck in the mountains of the Kravara, where Paddy bemused the villagers by his interest in Boliarika the secret language spoken there in bygone years. A young man in the taverna that serves wild boar steaks had at least heard of the language, though not of Paddy; “this was all long, long ago”. Then to Kardamili and to THE HOUSE. What can I say; it was a pilgrimage to be standing in that famous study. And finally to Tenaro at the tale (sic) end of Europe, where the lighthouse keeper threw wild pears into Paddy’s boat as he sailed by. No pears for us, but we were greeted on the car park by the current incumbent, about to set off on his trek to work.